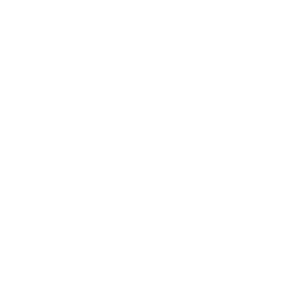 Luna - Setting up a design system 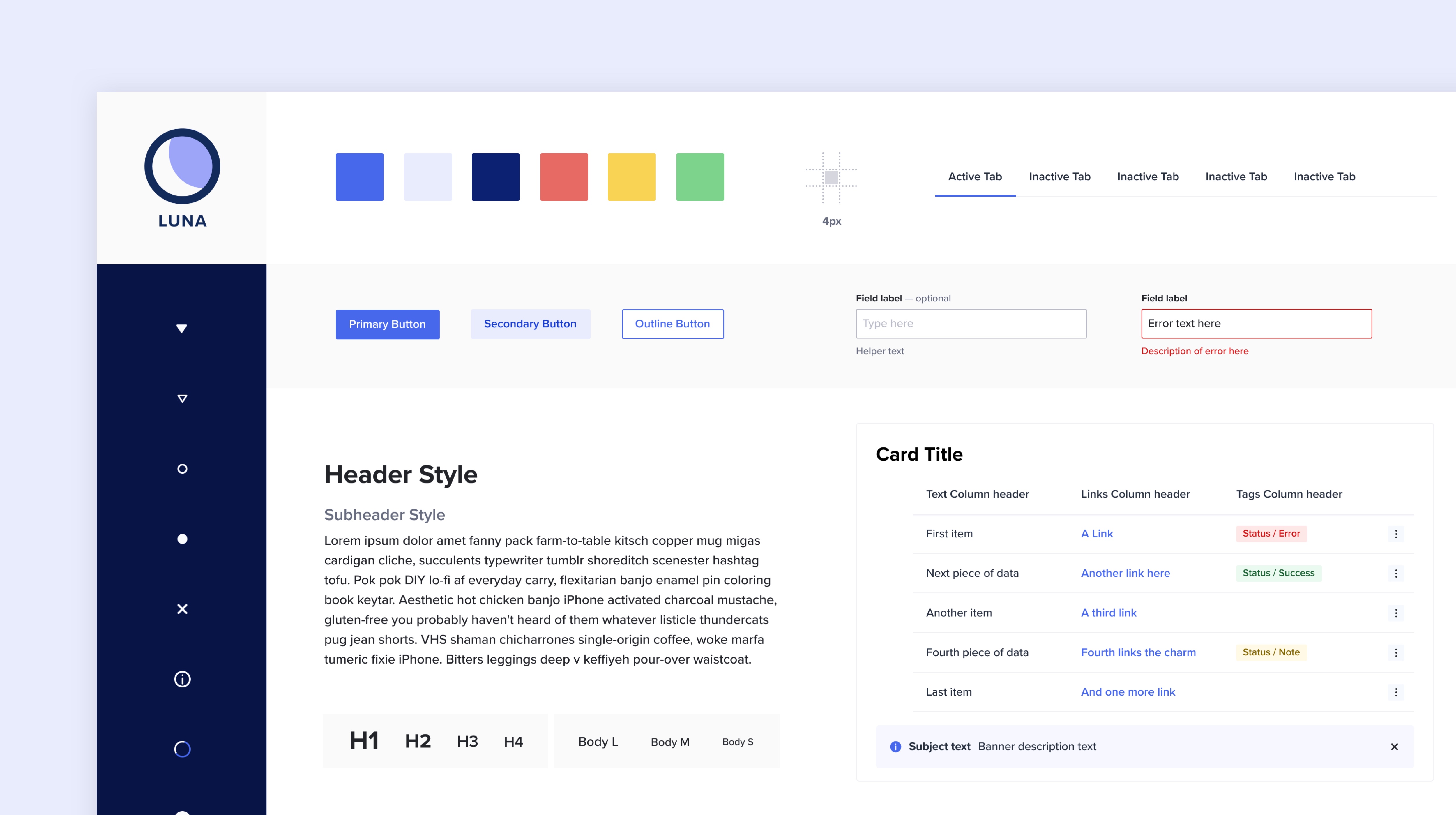 Luna is the design system of Rexlabs, the company I currently work for as a product designer. My role was to support the Head of Design in the initial set up of the project, product and team.

The need for a design system

Rexlabs is a tech company that builds digital products for the real estates industry. At the time of this project Rexlabs had five different digital products on the market and two new ones on the way. The bigger the company grew, the more evident was the need for a multi-brand design system:

- Consistency: With the lack of UI guidelines and well-functioning UI kits, some of the digital products had accumulated a significant amount of design debt
‍
- Scalability & Efficiency: Rexlabs had multiple more product planned in the pipeline and a holistic design system would allow us to build future products more efficiently whilst maintaining high quality
‍
- Cross-functional teams: Just before the project started our teams had moved from disciplinary to cross-functional, which meant collaboration and exchange between designers was more difficult and there was significant risk for product teams to develop their own processes and language
‍
- Focussing on discovery over execution: Having a well-functioning design system in place would allow designers and developers to spend less time pushing pixels and writing code and more time discovering and solving user problems 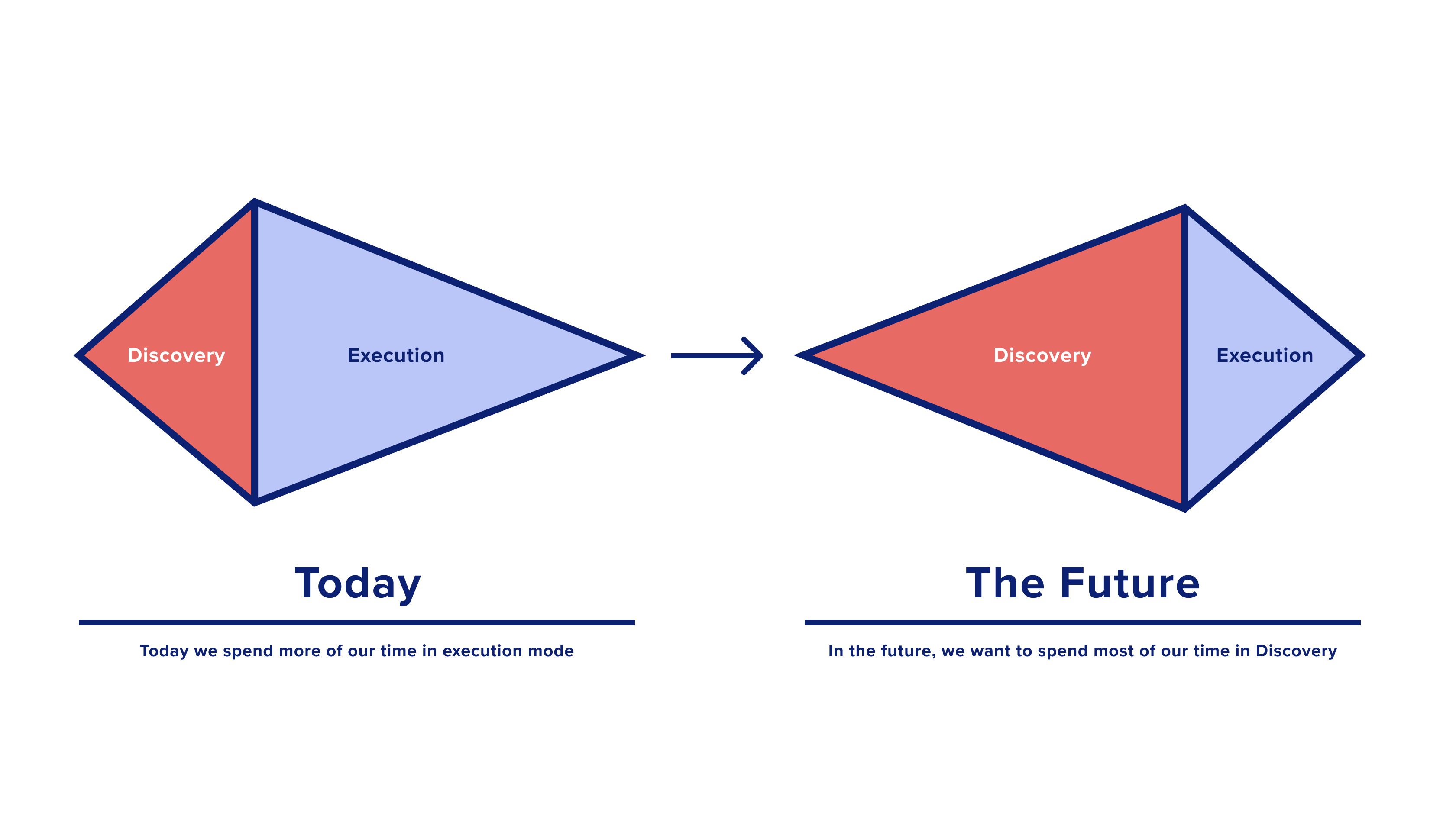 Treating Luna as a product

Luna wasn't the first attempt at Rexlabs to create a design system. In fact it was the third. The reason why previous attempts had failed included that there wasn't a dedicated team with ownership over the project. This time it was decided to treat Luna as a product in its own right, which meant, this time, it was being given a dedicated team, a UX process and identified users. 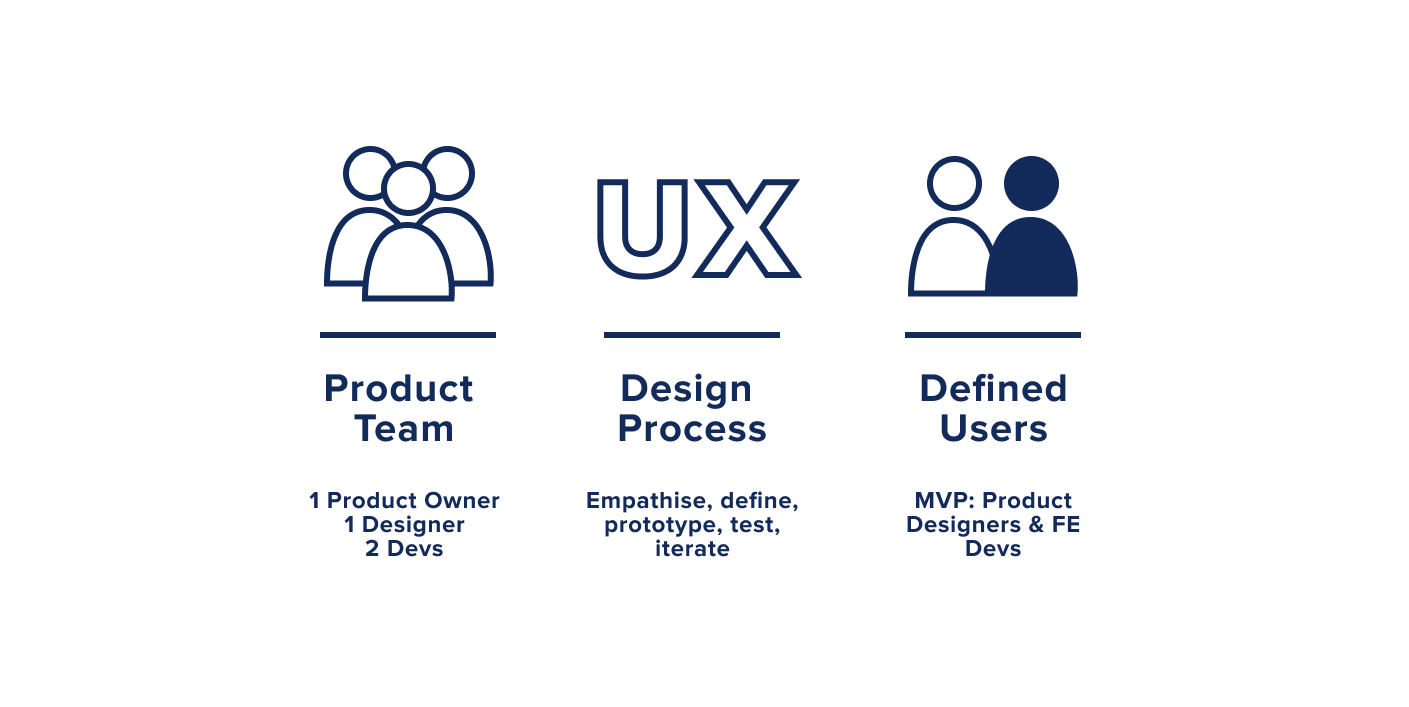 To kick off the project we had a closer look at the stakeholders of our ucts. We mapped them according to both their importance to success of the project as well as their interest to better understand what level of communication will need to be maintained throughout the project.‍‍

We also identified our main users as Product Designers and Developers with Product Owners, the Brand and Marketing Team being added as users later down the track. 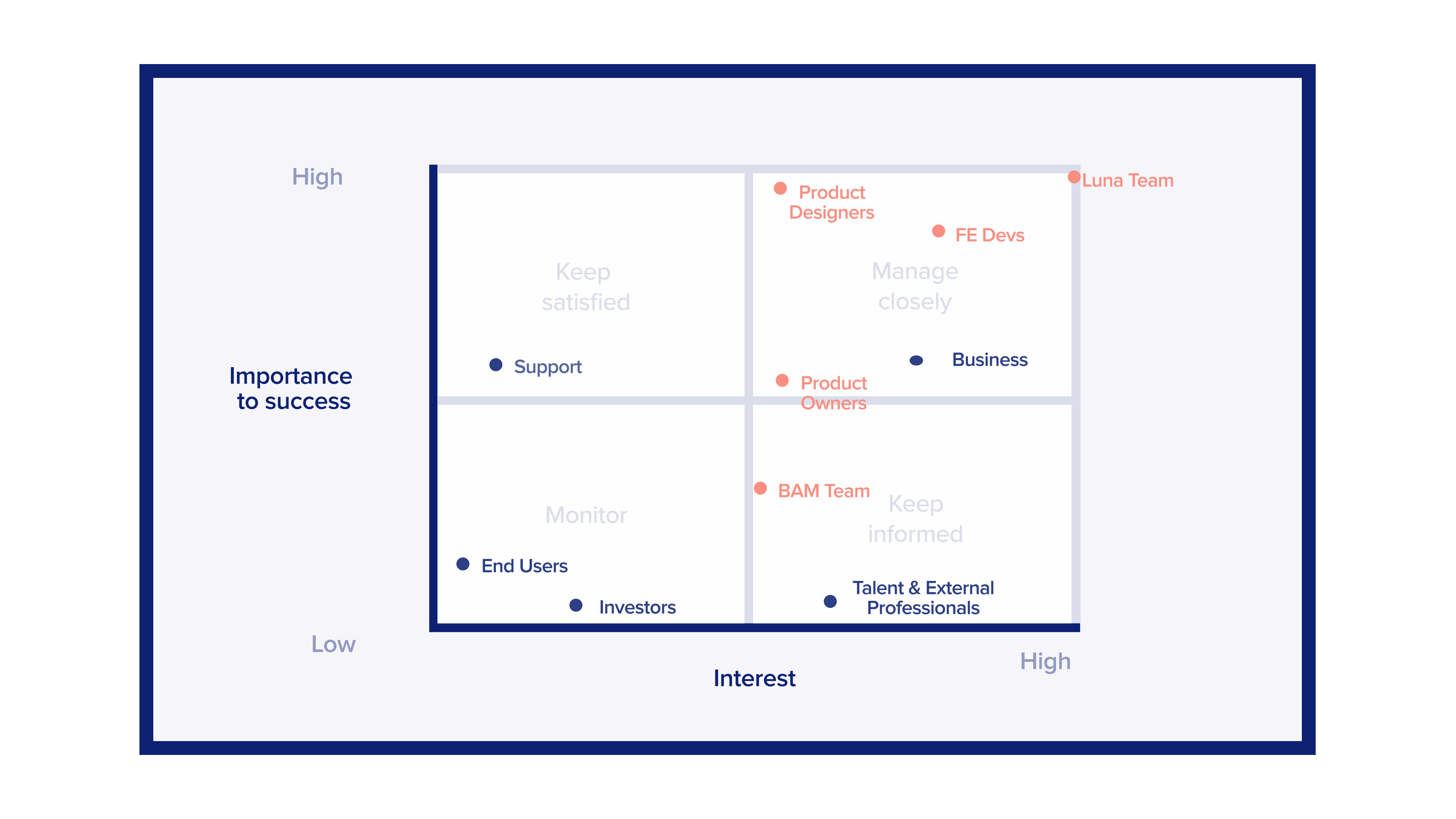 We kicked off our design UX process with user interviews. We decided to focus primarily on our product designer for two reasons:

1. Our front-end developers had previously worked with a component library much like the one they would work with in Luna, which gave us great insights into their needs

2. Because Luna was our third attempt to a design system we anticipated was some residual frustration as well as disbelief as to the successful outcome of the project amongst product designers. This user group was the one to be listened to most and won over.

To add to the above: we considered our user interviews with designers to double up as an exercise to win buy-in from them. A design system can only grow and thrive when it is enthusiastically used. So it was vital to not to only understand their needs and deliver accordingly, but also give product designers a voice and a sense of inclusion and ownership in the process.

We interviewed all of our 8 designers at the time in in-person question interviews. We also provided them with checklists to indicate what items they would want to find in the documentation part of the design system. We then sent out a follow-up survey to get a better understanding of their current time spent and tools used. 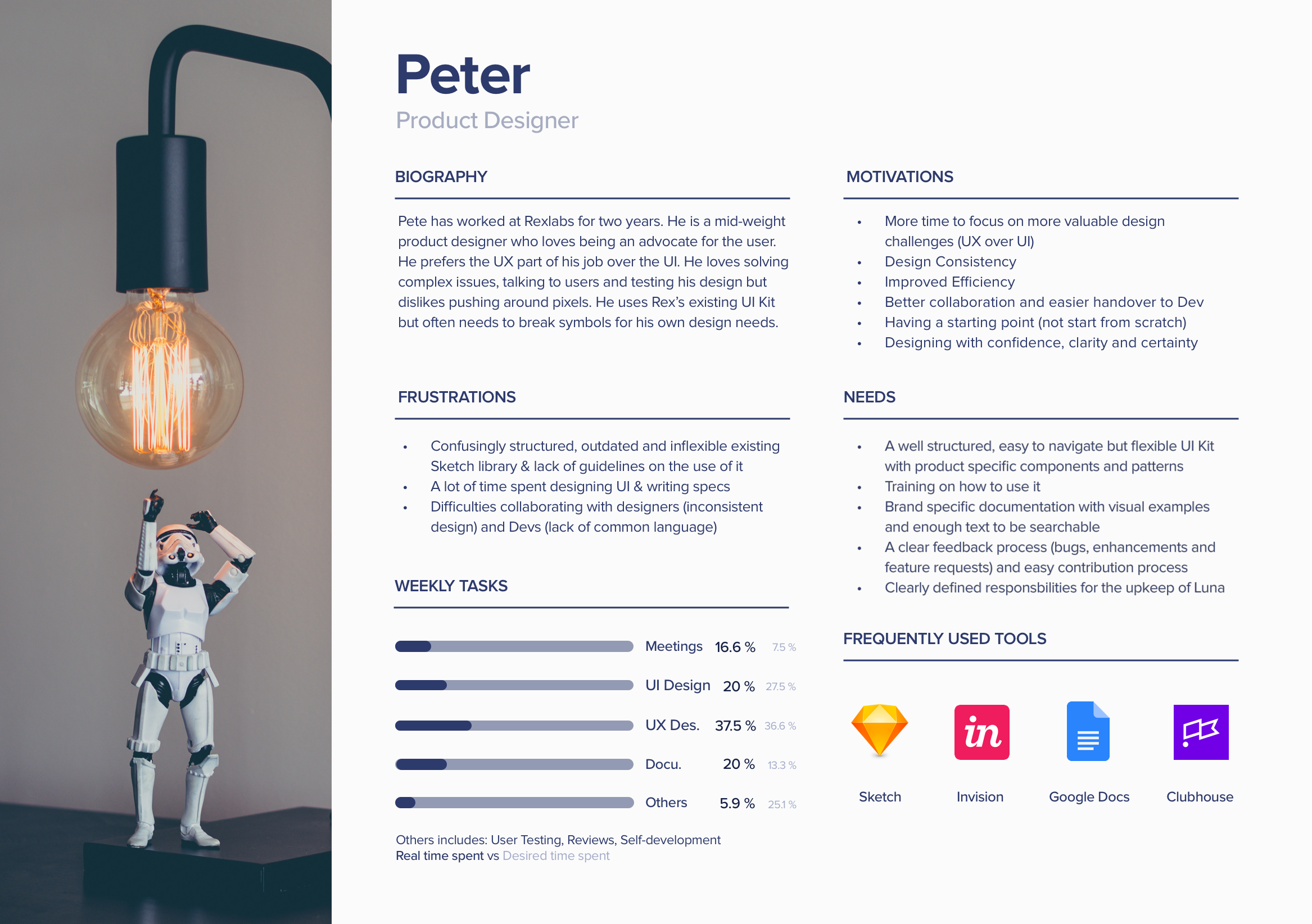 Persona of a Product Designer

We analysed the results and found the following:
‍
- Limited experience: Our product designers had limited experience using a holistic design system. They had worked with UI Kits before (both at and prior to Rexlabs), however, with mixed experience
→ There would have to be a considerable amount of training on how to use Luna at the start as well as clear communication as to what Luna will encompass (in addition to a UI Kit).
‍
- Interest was high: Our product designers were excited about the prospect of working with a design system, their main aim being to design more efficiently and consistently
→ Despite our initial concerns we has significant initial buy-in for the project/product
‍
- Starting point vs prescriptiveness: Most designers enjoyed doing UI and would favour a flexible design system that acts as a starting point for their designs over a prescriptive design system
→ Luna would have to be flexible enough for our designers to have some level of creative freedom to ensure uptake
‍
- Unclear responsibilities: It was unclear to our designers, who would be responsible for the management and contribution to the design system.
→ We realised we would have to be clear in our communication about governance and processes. 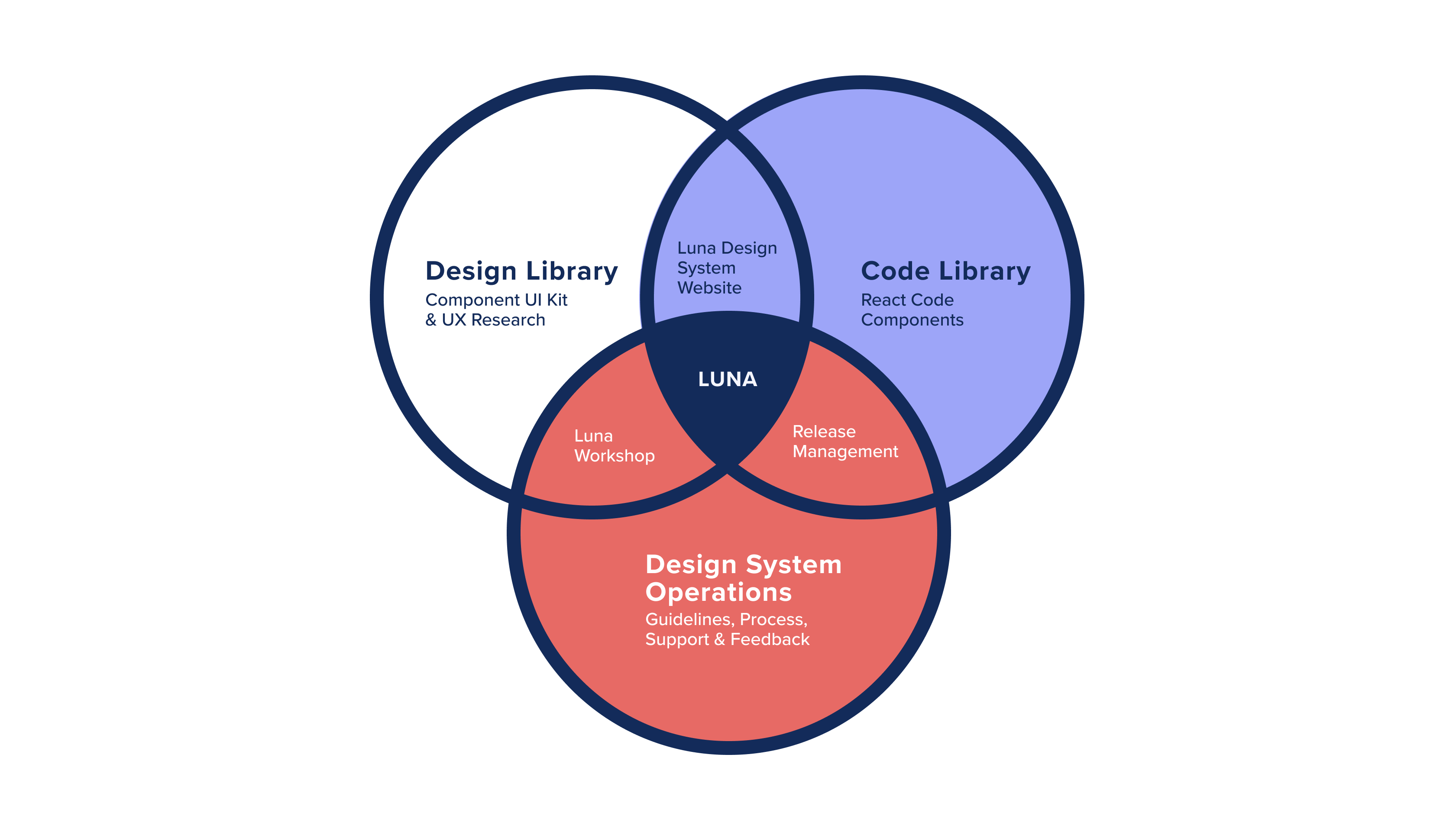 Towards the end of my time in the team (which was always meant to be in a short-term supportive role), I had the pleasure of hiring my now colleague Eva Plaisted and handed over to her.
‍
Eva and I also had the great pleasure to share our passion and experience for the project at a Ladies that UX Brisbane Event, an industry networking group which I am a co-organiser of. Below is a link to our talk and you can find our slide deck here.